Authentic Indian Museum
Welcome to SJM Museum
Promotion of Cultural Heritage
Evidence from Antiquity
OPENING TIMES:
All Days
9.00am to 8.30pm
Call for
Information
+91 8951064765
Follow Us: 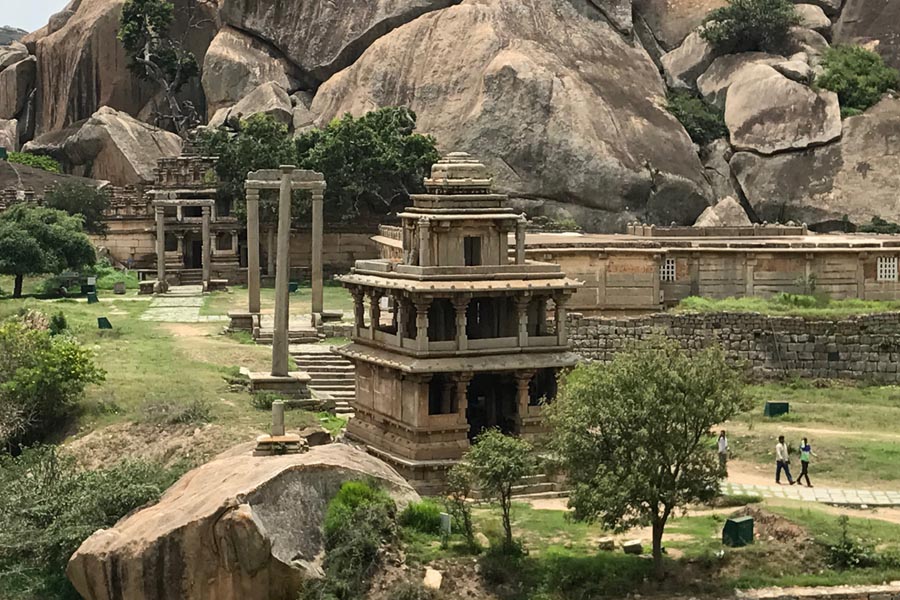 Located at a Distance of 202 kms. northwest of Bangalore, in the heart of the Deccan Plateau,

Chitradurga Fort is renowned for its Kallina Kote / Ukinna kote / Elu Suttina kote which was built in parts by the Palegar Nayakas, Hyder Ali and Tipu Sultan. It comprises a series of seven enclosure walls in Kannada. Eighteen ancient temples can be found inside the fort. This seemingly impregnable fort has 19 gateways, 38 posterior entrances, a palace, a mosque, granaries, oil pits, four secret entrances and water tanks.

Chitradurga features bold rock hills and picturesque valleys, huge towering boulders in unimaginable shapes. It is known as the "stone fortress" (Kallina Kote). The landscape looks much like a mischievous giant's playground, with boulders thrown around, forming silhouettes against the sky. According to a story in the Epic Mahabharatha, a man-eating gaint named Hidimbasura lived on the Chitradurga hill and was a source of terror to everyone around. When the Pandavas came with their mother Kunti in the course of their exile, Bhima had a duel with Hidimba. Hidimba was slain by Bhima and peace returned to the area. Legend has it the boulders were part of the arsenal used during that duel. In fact, the boulders on which major part of the city rests belong to the oldest rock formation in the country.

Timmana Nayaka a chieften under the Vijayanagar empire rose to the rank of governor of Chitradurga as a reward for his excellence in military achievements, from the Vijayanagara ruler. This was the beginning of the rule of the Nayakas of Chitradurga. His son Obana Nayaka is known by the name Madakari Nayaka 1588 CE. Madakari Nayaka's son Kasturi Rangappa 1602 succeeded him and consolidated the kingdom to rule peacefully. As he had no heirs to succeed him, his adopted son, the apparent heir was enthroned but was killed in few months by the Dalavayis.

During the reign of Madakari Nayaka, the city of Chitradurga was besieged by the troops of Hyder Ali. A chance sighting of a woman entering the Chitradurga fort through an opening in the rocks led to a clever plan by Hyder Ali to send his soldiers through the hole. The guard on duty near that hole had gone home for lunch and asked his wife to be on guard till he was back. The wife of that guard, Obavva while in her temporary seat, noticed soldiers emerging out of this opening. Obavva was not perturbed. She was carrying with her a Onake (a long wooden club meant for pounding paddy grains). She killed Hyder Ali's soldiers one by one as they attempted to enter the fort through the opening and quietly moved the dead. Over a short period of time hundreds of soldiers entered and fell, without raising any suspicion. Obavva's husband, upon his return from his lunch was shocked to see Obavva standing with a blood stained Onake and hundreds of dead bodies of the enemy around her. The opening in the rocks still remains as a historical witness for the story, beside the Tanniru doni a small water source which holds cold water all round the year. Though her sincere and brave attempt saved the fort on that occasion, Madakari Nayaka could not repel Hyder Ali's attack in 1779. In the ensuing battle, the fort of Chitradurga was lost to Hyder Ali. Obavva, like Kittur Rani Chennamma remains a legend, especially to the woman of Karnataka.